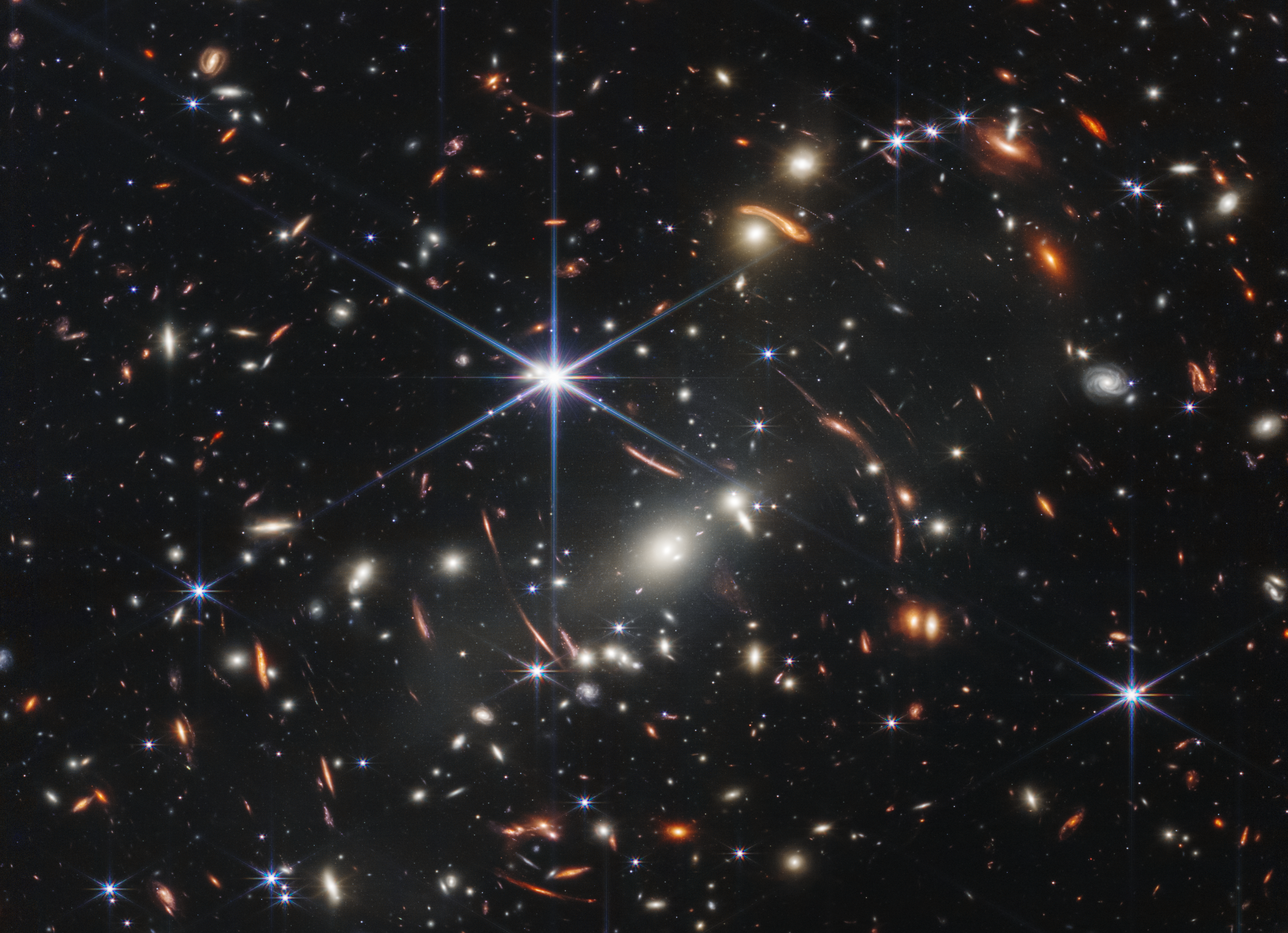 Last night, 11th July 2022, the White House held a special event to preview one of the first science images captured by the James Webb Space Telescope (JWST). President Biden was joined by Vice President Harris and NASA Administrator Bill Nelson to reveal the first “Webb Deep Field”: a stupendously beautiful image of a distant galaxy cluster showing thousands of previously unseen galaxies in the background. Today, more images are set to be revealed which will showcase the possibilities of the most powerful space telescope to change all areas of astronomy research. Just like the Hubble Space Telescope before it, JWST will bring us answers to questions which have not even been asked at launch. 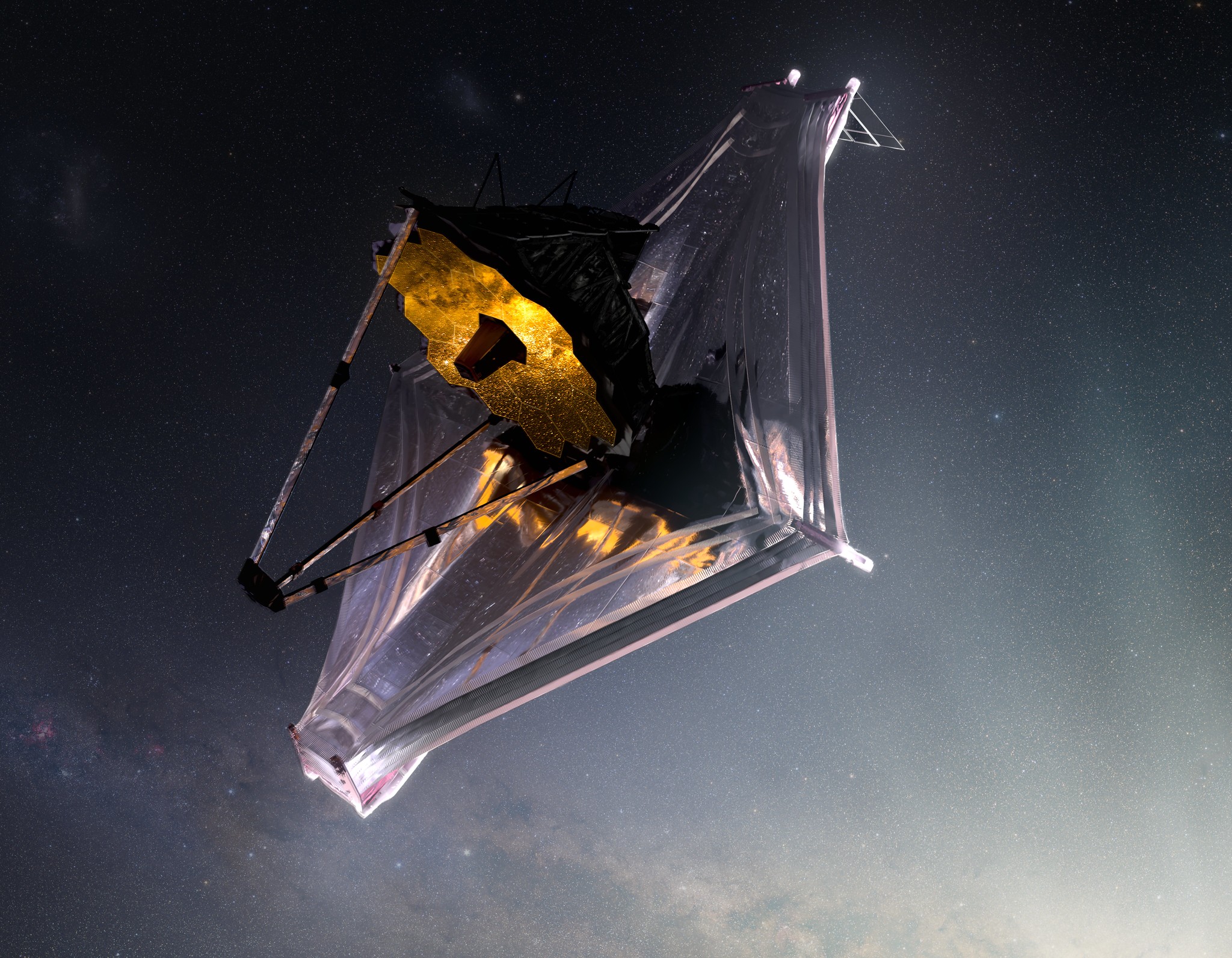 After decades in development and months of launch delays, JWST (sometimes nicknamed “Webb”) finally lifted off on Christmas Day, 2021. If anything, it was the next few weeks which were the most fraught with terror for the astronomical community: with the Telescope launched, it was up to the automated systems to perform the delicate dance of unfolding the solar arrays and mirrors, before work on focusing could begin.

The first focused image from the primary mirror was released on 11th March 2022. A star which has previously been seen as eighteen separate images (a result of the mirror being made of eighteen hexagonal segments) was brought into brilliant focus, with a trove of faint galaxies visible in the background. Now the commissioning phase is over, JWST’s instruments are performing at or beyond their mission specification and the team have announced that there is enough fuel on board to last potentially twelve or more years.

The biggest difference between JWST and the Hubble Space Telescope is that the new telescope is designed to observe infrared light. Infrared (meaning ‘below red’) radiation is similar to the light our eyes can detect, only longer in wavelength and lower in energy. This is significant because, as our universe has expanded, light from the earliest stars and galaxies gets stretched from visible light into the infrared part of the spectrum, meaning JWST can literally see galaxies further back in the Universe than any telescope before it. Infrared radiation is also emitted by objects cooler than stars, such as galactic dust which glows in low energy infrared (known as “far infrared”, or FIR).

One reason it is so important to have a large infrared observatory in space is that infrared light does not travel well through the Earth’s atmosphere, so while observatories atop mountains and in arid locations such as the Atacama Desert have infrared capabilities, getting out of the atmosphere entirely is worth the hassle.

Perhaps the most incredible statistic about the preview image unveiled on Monday night is that the total exposure time was only around 12.5 hours, and yet the telescope was able to detect sources fainter than can be found in the Hubble Deep Field which were exposed for over a week.

Clearly visible in the foreground of the image are a number of stars. They are distinguishable by their six-pronged diffraction spikes, a by-product of the arms which hold the telescope’s secondary mirror in place. Every other source in the image is a galaxy, each containing billions of stars.

The cluster in the centre of the image, known as SMACS 0723, had been observed by the Hubble Space Telescope and was known to be a good example of an effect known as gravitational lensing. Each of the yellow-white blobs is a massive elliptical galaxy which has been created by the merging of several smaller galaxies, but there is yet more matter there in the form of Dark Matter. All this comes together to create a gravitational pull so strong that light from background galaxies is pulled in new directions on its way past. The arcs you see around the edge of the cluster are galaxies situated behind the cluster but whose light has been bent back towards us as it passed the foreground cluster.

Due to the tiny angles typically involved in gravitational lensing, it is only visible as an effect when looking at truly distant galaxies (SMACS 0723 is around 4 billion light years away). This is why JWST’s unparalleled resolving power and sensitivity will play such a vital part in understanding how dark matter is distributed throughout the Universe.

But it is not just pretty pictures which will come from this new observatory, it also houses two state of the art spectral instruments which will allow even more knowledge to be gleaned from objects far and near in the Universe. 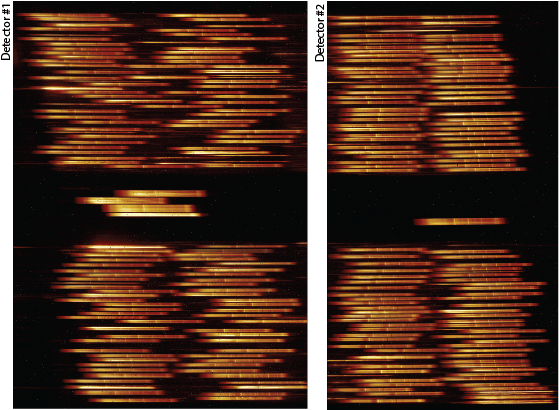 The spectrum being released Tuesday is of the exoplanet WASP 96b. This world is twice the mass of Saturn and yet orbits its host star in just under four days. One of the science goals of JWST is to use the fact that light from a star will have to pass through the atmosphere if an exoplanet transiting in front of it, meaning the profile of absorption lines carved out of the star’s spectrum will be slightly different within and outwith transits. JWST’s infrared spectrometers are sensitive enough to pick out these differences, allowing us to study exoplanets in greater detail than ever before and hopefully find atmospheres around exoplanets which might be capable of hosting life.

Two more targets within our galaxy will be revealed by JWST’s imaging cameras during the press event: the Carina Nebula and the Southern Ring Nebula. The Carina Nebula is an enormous (over 200 light year wide) cloud of gas which is collapsing to form new stars, it also plays host to Eta Carina, an unstable pair of massive stars of which one which may be close to going supernova. The Southern Ring Nebula (NGC 3132) is a bubble of gas expelled by a medium sized star (more massive than our Sun but no more than about eight times its mass) at the end of its life. Such stars do not explode in a supernova but rather puff out the outermost layers of their atmospheres to reveal their central carbon core, known as a white dwarf star.

In visible light images of these nebulae, we see glowing gas illuminated by the energetic ultraviolet and x-ray light from the white dwarf or from bright, young stars. In a star-forming nebula such as the Carina Nebula, we know that it is in the coldest areas where gravity can begin pulling the slow-moving gas together to create new stars. JWST’s cameras will allow us to pull back what had previously been an obscuring curtain of opaque, cold dust and probe the regions around newly forming stars in greater detail. We will also be able to better understand how quickly the Universe came to be filled with heavy elements (to astronomers, ‘heavy’ elements means any atom larger than helium).

The final target on the list for JWST’s press day is called Stephen’s Quintet. This group of interacting galaxies is unique in this list in that they are in the northern celestial hemisphere, making them observable from here at Kielder, though only with our camera-equipped telescopes. This group of spiral and irregular galaxies is locked in a billions of years long dance towards merging into a giant elliptical galaxy. While we can observe the light from the stars in the galaxies, we can extract more information about the nature of these galaxies’ interactions by studying the darker dust. When galaxies merge, the stars do not generally collide with each other as the distance between them is too vast. However the larger dust clouds, with matter more evenly spread through space, do collide and this can lead to bursts of star formation in recently merged galaxies. JWST will be able to measure which of the large clumps of gas within these galaxies have begun to warm up as the result of new stars forming deep within them.

We are only at the beginning of the JWST era, which will see some of the greatest leaps forward in our understanding of the Universe. Each result is a testament to the diligence and dedication thousands of astronomers and engineers, from around the world, who painstakingly designed, refined, built, tested, modelled, rebuilt, launched and commissioned this telescope into its current, science-ready state. The debate over whether James Webb, who oversaw two US Government organisations throughout a period where it was routine for Government employees to lose their jobs for even being suspected of being homosexual, is an appropriate figure to name such an historic observatory after will continue among the astronomical community.

The wait for JWST science operations has been long, and at times it may have felt like we might not reach this moment, but if the results we have seen so far are anything to go by then it will absolutely have been worth the wait.