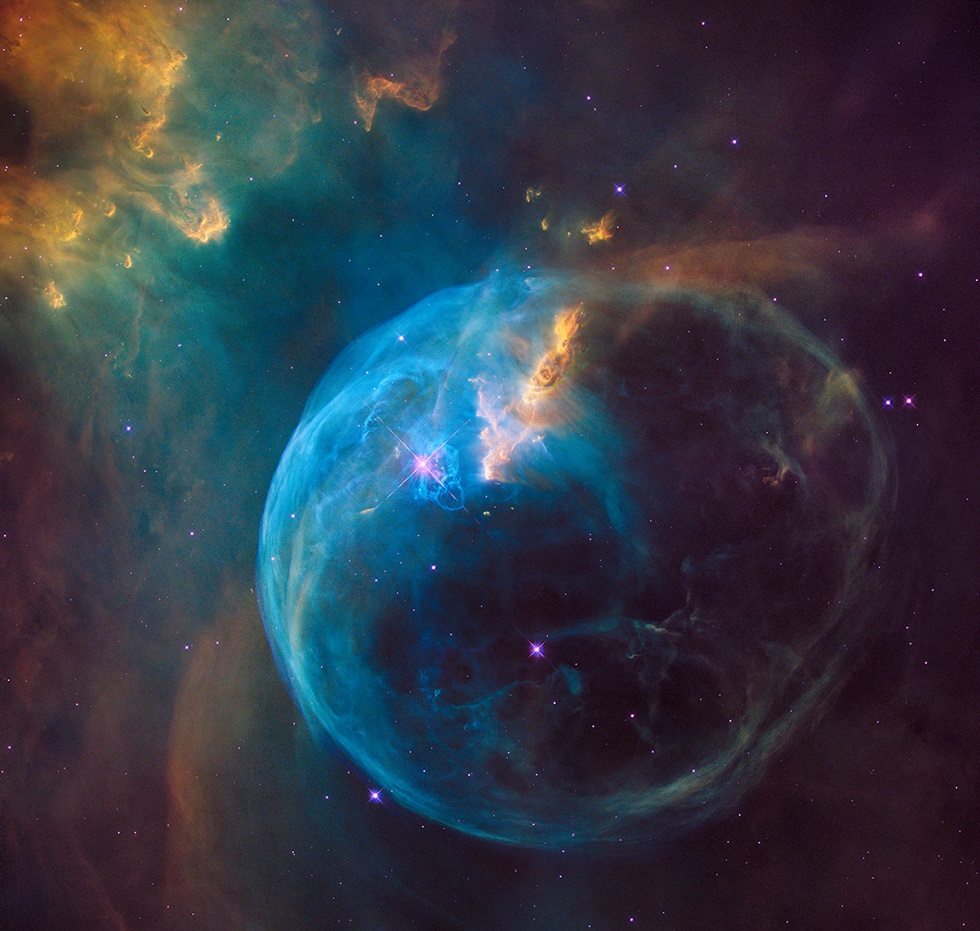 At 7,000 to 8,000 light years away, hiding in the constellation of Cassiopeia is the Bubble Nebula. It is a fantastic example of an emission nebula: a dusty region of space which is being superheated - to temperatures of about 10,000 degrees Celsius - by an extremely hot and massive star. This glowing shell of gas is mainly made up of hydrogen, nitrogen and oxygen, which is being excited by the radiation from the central star (the brightest star towards the upper-left quarter of the nebula).

As material from the surface of this fiercely hot star continues to be expelled, it pushes against an interstellar dust cloud which slows its progress and gives the nebula its distinct shape. The asymmetry of the expanding nebula hints towards irregularities in the giant dust cloud in which it is embedded; much like a plough piling up snow as it moves, where the star’s outflow encounters a denser region it is slowed more, whereas towards the bottom right of the nebula it flows more freely and quickly away. This is also the reason why the star in question lies off centre within the nebula.

Every year in April, the Hubble Space Telescope releases a different image to celebrate yet another year since its launch (24th April 1990) into low-Earth orbit. In 2016, Hubble celebrated its 26th birthday by capturing the above image. It is the culmination of many visible photos taken by Hubble’s Wide Field Camera 3 in February of the same year, where red represents nitrogen, green for hydrogen and blue for oxygen. This snapshot of the Bubble Nebula gives us an insight into the complex environment surrounding such hot massive stars, with scientists estimating that this star is due to detonate as a supernova in the next 10 to 20 million years.

If you would like to follow in William Herschel’s footsteps who discovered the Bubble Nebula in 1787, and observe this for yourself, then you are in for a bit of a challenge! It is possible to see as a faint glow through a medium 8” aperture telescope, if you know exactly where to look. It is situated in the constellation of Cassiopeia, about half a degree southwest from a well-known open cluster of stars called M52, surrounding the bright central star that is seen in the above image.

For more information on this nebula or how to observe it, book an event at Kielder Observatory and speak to one of our experienced astronomers!