Recently, solar scientists have witnessed an interesting development on the Sun. Sunspots, although still infrequent, have been appearing now and again at mid-latitudes and with reversed magnetic polarity. Sunspots are sunken, cooler regions of gas on the surface which can appear dark in comparison to the surrounding area through a solar filter. From one solar cycle to another they can shift position slightly and their magnetic orientation reverses and so these new ones indicate that we could be going into the next solar cycle, number 25.

The solar cycle is the recurrent change in the sun’s activity - the number of spots and flares - which have been observed to increase and decrease in an almost-reliable 11-year cycle. The cycle has been well documented: solar cycle 1, one of the first comprehensive studies into solar activity, began in 1755. Since then, we have seen the number of sunspots and flares on the Sun’s surface increase and decrease over this period in a fairly consistent manner.  However, there have been periods of time in the past when the Sun has not obeyed this trend. From around 1645 to 1715, the Sun did not display many spots at all; this is often referred to as the Maunder Minimum. In a ‘normal’ cycle however, at the beginning of the pattern, sunspots tend to appear at mid-latitudes and, as the cycle progresses, they tend to shift towards the sun’s equator. It is understood that this cycle is linked to the sun’s global magnetic field. At the peak of the solar cycle, the global magnetic field of the sun reverses, with north becoming south and vice versa. The last time the magnetic field of the Sun reversed was in the late summer of 2013. 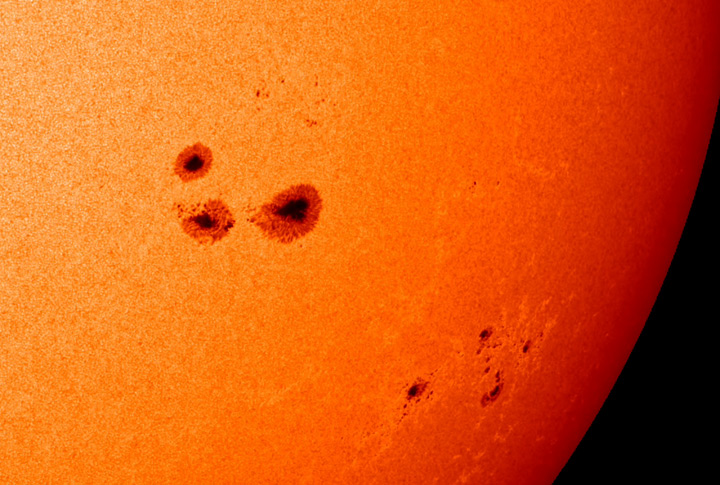 Courtesy of NASA/SDO and the AIA, EVE, and HMI science teams.

The number of sunspots and the cycle in general is of interest if you wish to view the aurora, especially from lower latitudes on the Earth. Charged material flowing from the Sun can get trapped in the Earth’s magnetic field and flow into the poles, making the atmosphere glow. At the height of the cycle, when solar activity is at a peak, we are more likely to see the Northern Lights push farther south and with greater intensity in the sky. Therefore if we are indeed pushing on into cycle 25, the likelihood of vibrant and lower-latitude observing of the aurora gradually increases over the next 5 years.

The strength of the peak of each solar cycle is also a little variable. The previous solar cycle, number 24, was fairly weak. In fact, the peak year saw around 120 spots. Cycle 23, previous to that, saw around 185 and cycle 22 saw around 215. If this downward trend continues, this cycle could be weaker still. However, the strength of the peak is very difficult to predict in advance. The International Solar Energy Society (ISES) and NOAA's Space Weather Prediction Center (SWPC) have not forecast the strength of this solar cycle to come. As well as this, models in the past have indicated various conflicting outcomes. We will have to wait and see, however, if this has whet your appetite for more physics and the chance to perhaps see the aurora, more information can be found at www.spaceweather.com and www.swpc.noaa.gov/communities/space-weather-enthusiasts.